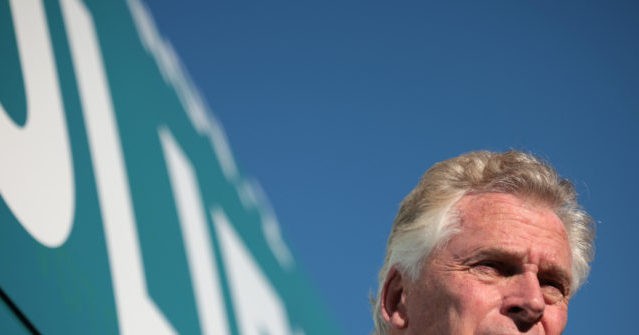 Friday evening five people, including at least one Democrat operative, raised tiki torches in front of candidate Glenn Youngkin’s campaign bus to remind “Virginians what happened in Charlottesville four years ago,” the Lincoln Project said of the stunt to draw former President Trump into the Virginia election.

These men approached @GlennYoungkin’s bus as it pulled up saying what sounded like, “We’re all in for Glenn.” Here they are standing in front of the bus as his campaign event at Guadalajara started.@NBC29 pic.twitter.com/l681ejyBjc

The hoax has “prompted concerns” that it could destroy the election chances of the Democrat candidate McAuliffe, Newsweek pointed out.

“What a massive, massive screw up,” she said. “The last thing that the McAuliffe campaign needed this weekend. A total disservice to the hundreds of hard-working staffers on the ground.”

Democrat Virginia lawmaker Sally Hudson accused the Lincoln Project of using her community as a prop. “Charlottesville is not a prop. Our community is still reeling from years of trauma… Don’t come back, @ProjectLincoln. Your stunts aren’t welcome here.”

The dean of the Schar School of Policy and Government at George Mason University told the Washington Post the hoax backfired on the organization and is “so ridiculous.”

“The overreach backfires because it is so ridiculous in its execution it hurts the point they’re trying to make,” Mark Rozell wrote.

Republican congressman Joe Walsh (R-IL) stated the hoax was “a stupid, desperate, dishonest thing to do. @ProjectLincoln, you ought to be ashamed of yourselves.”

The stunt, which went viral under the hashtag, #TikiGate, is not the publicity McAuliffe is seeking heading into Tuesday’s election. McAuliffe and Youngkin have been nearly tied in the polls in the last weeks, but Fox News revealed Thursday Youngkin increased his lead over McAuliffe by eight points (53-45 percent) among likely voters.

To make matter worse, the communications director for McAuliffe on Friday was forced to apologize for bigoted tweets.

“I want to profoundly apologize and use this as a moment to grow and learn from my mistakes,” Renzo Olivari told Breitbart News. “When I was in high school student, I tweeted things that were clearly unacceptable. I am ashamed and I profoundly regret what I tweeted.”

Another said, “Are you Black? #SomethingIGetAlot Hahahahah”:

Hey @TerryMcAuliffe. Come get your comms guy. He’s showing his ass and embarrassing you. pic.twitter.com/r0qdYWICqa