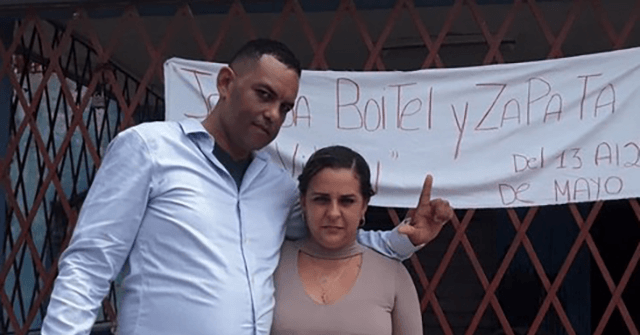 Cuban political prisoners Arianna López Roque and Mitzael Díaz Paseiro issued letters from prison this week urging citizens to rise up against the communist regime and participate in a national strike – a continuation of the massive anti-communist protests of July 11.

López and Díaz, a married couple, were arrested on July 11 for being one of an estimated 187,000 people to peacefully take the streets demanding an end to the 62-year-old Castro dynasty dictatorship. Both are facing eight years in prison.

Making their continued resistance even more remarkable are reports of extensive abuse within prison walls against them. Cuban dissidents on the island confirmed reports in October that López received a gang beating at the hands of Cuban regime thugs in front of a sizeable population of the Santa Clara prison containing her in response to her urging protests among the inmates.

Both activists released handwritten letters on Wednesday through the Assembly for the Cuban Resistance, a coalition of pro-democracy groups on the island and in exile.

López vowed in her letter to continue advocacy against the communist regime at all times, even from behind bars, according to a transcript and images of her letter published by the Assembly for the Cuban Resistance.

“I belong to the generation of Patria y Vida,” she wrote, referring to the Grammy Award-winning song whose name translates to “Fatherland and Life,” a play on the Cuban communist motto “Fatherland or Death” (patria o muerte). “[I am among] those who want a real change, those who want to be free, the mothers who want a better future for their children.”

“I do not know if today the dictatorship will finally execute its macabre plan of imprisoning me as punishment for my political activism,” López wrote. “All I know is that, from wherever I may be, I will offer my modest but sincere effort to achieve a free and democratic Cuba, the nation that [Cuban founding father José] Martí for Cubans.”

Both López and Díaz categorically denied having broken any laws in their letters. Díaz, like López, wrote that he would continue advocating for a free Cuba and urged as many Cubans as possible to participate in anti-regime efforts.

“I do not regret struggling for Cuba’s freedom. I feel proud of my people, who went out on the street civilly to demand their rights,” Díaz wrote. “We will be outside as many times as it is necessary to free Cuba. I reiterate the same call to a National Strike that I made before I was imprisoned, for the freedom of our people and of the political prisoners.”

The Castro regime has repeatedly denied the existence of political prisoners on the island despite the ample evidence of their existence. Estimates regarding the true number of political prisoners vary widely and most human rights organizations trying to keep track of those the Communist Party disappears into its repressive justice system. The Spain-based NGO Cuban Prisoners Defenders – issuing a heavy caveat that the number only represented individuals the regime confirmed to be behind bars and was a significant underestimate of the true toll – documented 805 political prisoners in Cuba as of December 2021, a 500-percent increase year-on-year.

Jorge Luis García Pérez, one of the longest-service former political prisoners in the island’s history, confirmed in October that police had beaten López and forced other prisoners to watch for her support of a national strike, a move to paralyze the Castro economy and pressure it to end its stranglehold on power.

“They dragged her to the prison yard and there was an entire garrison waiting there armed with batons, hoses,” Jorge Luis García Pérez, known popularly as Antúnez, confirmed to Radio Martí.

“They dragged her, they spit on her, they kicked her in front of the entire prison population and they did it with the objective of trying to terrorize the prison population. From there they moved her into a penitentiary cell where she currently remains,” Antúnez said at the time.

López’s open disrespect for regime violence is a growing pattern among the July 11 protesters and their families. While the July 11 national protests attracted more international corporate media attention, Cubans also took to the streets on November 16, this time often flanked by members of the Catholic clergy. Among those protesting were entire families demanding their imprisoned loved ones be released.

Among the most dramatic images from November 16 was the protest by the family of July 11 protester Andy García Lorenzo, who responded to an “act of repudiation” – a mob attack on a dissidents’ home – by standing outside and singing pro-freedom songs, smiling and laughing in the oppressors’ faces.

Assembly of the Cuban Resistance

On Thursday, the independent outlet Cubanet reported that Cuban authorities had punished Lorenzo, 23, by prohibiting phone calls for him in prison for two months in response to continued resistance from both himself and his family. Sister Roxana García Lorenzo told Cubanet that the punishment was partially because García was sharing information about the status of prisoners in the facility with his family, who had publicized it through the media, but also because his family had been so publicly supportive.

In the prison, his sister said, García is facing “threats, they tell him that if he keeps helping the prisoners they will add to their sentence demand and charge him with ‘incitement to commit crime,” that he will be judged for what we, his family, do out here.”

García is facing seven years in prison for “disrespect,” a crime in Cuba.