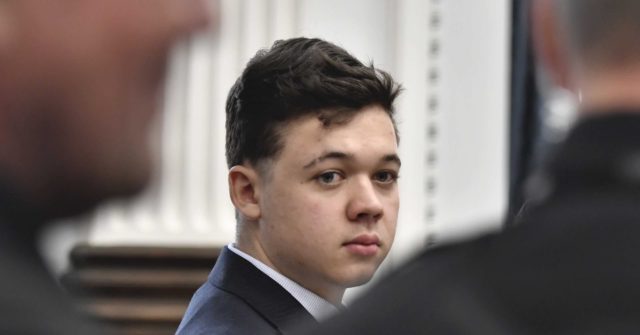 There is only one reason Kyle Rittenhouse is on trial for murder in Kenosha, Wisconsin: Democrats needed a scapegoat for the violence they themselves had caused and condoned during the Black Lives Matter unrest that shook the nation in 2020.

In that fateful last week of August 2020, the small, quiet Midwestern city exploded in unspeakable violence because of the fake news that police had shot and wounded an unarmed black man who was only trying to protect his family in their car.

The alleged victim of this police brutality, Jacob Blake Jr., was in fact armed with a knife at the time, and was violating a restraining order, visiting a woman he had previously been accused of assaulting. There was a warrant for his arrest, and the woman called 911, which is why the police were there.

Blake resisted arrest, and fought the cops. The police officer who shot him was investigated, and quietly exonerated.

But Democrats had no use for facts.

The morning after the riots erupted that Sunday night, August 23, then-candidate Joe Biden released a statement. Astonishingly, he blamed the police and declined to condemn the violence. He signaled that Blake was the latest victim of America’s “systemic racism.”

Thus given a green light by the standard-bearer of the Democratic Party, and by the establishment media, rioters flocked to Kenosha. The police, restrained by Democratic politicians, stood down and let it burn.

By then, millions of Americans had endured enough. The Republican National Convention — a televised spectacular that week — highlighted the nationwide unrest.

Biden’s poll numbers began to sink, and desperate Democrats took to the airwaves to urge Biden to say something, anything, to condemn the violence. But he was terrified of alienating the “progressive” left, for whom the violence was a sacred revolutionary rite.

Ordinary citizens, alarmed at the inaction of the police, and the refusal of Wisconsin’s Democratic leaders to accept help from the Trump administration, began to take matters into their own hands: cleaning up graffiti; sweeping up broken glass; and patrolling — yes, armed — at night.

Kyle Rittenhouse, a naive kid from Illinois, whose dad lived in town, joined the effort, with his first aid kit and an AR-15 a friend had stashed for him.

Let it be stipulated that young Kyle was in way over his head. Hardened criminals like Joseph Rosenbaum did not appreciate a do-gooder putting out fires; one local resident had his jaw smashed earlier in the week as he tried to protect his business.

Kyle Rittenhouse should not have been there. Nor should anyone else: the police and the National Guard should have been. And Democrats should have called them out.

When the news came through that two “protesters” had been killed and a third wounded in Kenosha, and that the gunman was a white guy with an AR-15-style rifle, the media and the Democrats had their storyline.

When someone found a photo that appeared to show Rittenhouse at a Trump rally, that sealed the deal. The media — with zero evidence — called him a white supremacist, a claim that Biden repeated. This wasn’t Kenosha; it was Charlottesville.

Now — with a “white supremacist” and a gun to blame — Biden seized an opportunity to condemn the violence. It was someone else’s fault now — not the fault of the mob that Black Lives Matter had unleashed and that Biden himself had condoned.

Moreover, Trump defended Rittenhouse, saying — correctly, it turns out — that it looked like he had acted in self-defense. Now the violence could be blamed on Trump and his supporters.

Just as he had all summer long, Biden blamed Trump for the riots across America. And the local prosecutors took the hint, charging Rittenhouse with murder without a shred of investigation.

Ironically, it was Trump, not Biden, who visited Kenosha to show his sympathy with the town. The Biden campaign, certain that Trump’s visit would backfire, stayed away.

Only when local leaders welcomed Trump did Biden’s handlers realize their mistake, and they hurried to add Kenosha to Biden’s itinerary, which had largely consisted of campaigning from his basement until then.

But the fact that Rittenhouse was being prosecuted allowed Biden and the media to maintain their fictions about Kenosha, about Black Lives Matter, and about Trump.

Only now, with the trial, has the truth come out: that Rittenhouse did not fire the first shot; that he only shot people who were attacking him; that he tried to de-escalate, and to flee, rather than instigating violence; that he tried to turn himself in. And no reasonable jury could convict Rittenhouse. None.

The prosecutor tried to violate Rittenhouse’a constitutional rights by commenting on his post-arrest silence, and when that failed, he went after another witness for his supposed political views.

It should have been a mistrial, with prejudice, to prevent prosecutors from trying again; it will likely be an acquittal.

Will Rittenhouse get the apology he deserves — from Biden, from the media, from the Democrats who caused this mess? No.

But here’s one thing we know: Kyle Rittenhouse is alive because he had the right weapon. And it’s the one Democrats want to take away — from everyone.

Joel B. Pollak is Senior Editor-at-Large at Breitbart News and the host of Breitbart News Sunday on Sirius XM Patriot on Sunday evenings from 7 p.m. to 10 p.m. ET (4 p.m. to 7 p.m. PT). He is the author of the recent e-book, Neither Free nor Fair: The 2020 U.S. Presidential Election. His recent book, RED NOVEMBER, tells the story of the 2020 Democratic presidential primary from a conservative perspective. He is a winner of the 2018 Robert Novak Journalism Alumni Fellowship. Follow him on Twitter at @joelpollak.