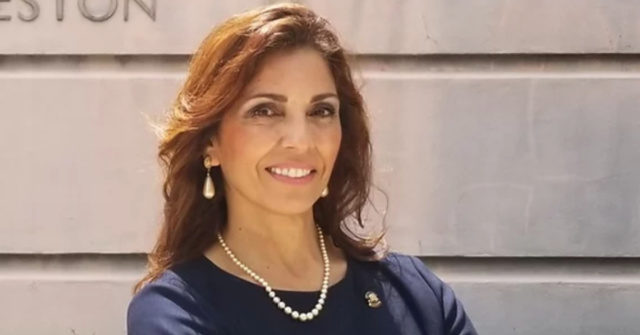 Candidate Ingrid Centurion slammed Rep. Nancy Mace (R-SC) for turning “her back” on Donald Trump once she went to Washington, DC.

Centurion, a former Army and immigration law enforcement veteran, told host Matthew Boyle on Breitbart News Saturday that Mace has not governed the way she campaigned in 2020. “She’s playing both sides. She wants to cater to all those people out there who hate and despise Trump,” she said. “And we see that in her voting record and what she does.”

“I wanna be able to help the low country people who’ve been here their whole life [and] love this place,” she explained. “We wanna continue to preserve it, to conserve it, to recognize our history,” she said as an entrepreneur, mother of two boys, single mom, and a “disciplined warrior.”

Centurion is also a former science and technology officer who supported border patrol and law enforcement agencies to stop illegal aliens and drugs from crossing into the United States.

“I would be out there in the middle of the night observing, seeing 300 people in Mexico ready to come across,” she said about her former experience. “So we would call out to the border patrol and them know where they are and then the border patrol would go in – one agent by himself in a vehicle and catch these groups,” she said of border patrol agents who stem the flow of migrants.

“People need to understand that border security is so important in America,” she continued. “This requires an immediate and emergency action by our leaders in office. They need to be working with the Mexican government to stop this immediately.”

“When they [migrants] come across that border, they should not be shipped in aircraft around the country; they should actually be put on a bus straight back to Mexico,” she said about the Biden administration’s agenda of flooding America with cheap labor. “I don’t understand why we’re flying them around this country, they [Biden administration] know there are illegal entries,” she said. “We’ve identified them, and this requires immediate action.”

“For our government leaders to just sit back and do nothing, it’s a shame, and if they are doing something, it’s just not enough,” she added.

“What President Biden has done is just a true national security risk to a country. And in less than 10 months, we had so many people come across the border. What is America gonna look like after three more years of this?” she asked. “That’s my number one thing I wanna focus on… national security – threats to this nation – and truly fixing and securing borders – something must be done.”