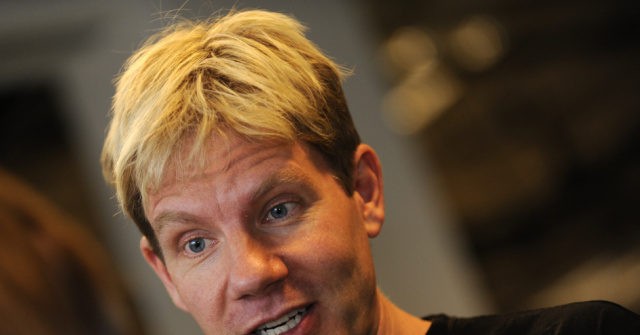 As the United Nation’s COP26 summit gets underway on Sunday, a lone voice is pushing back on the existential threat of so-called climate change and most of the left-wing media, who will provide non-stop doomsday warnings.

That voice is Bjorn Lomborg, a Dane who is president of the Copenhagen Consensus and a visiting fellow at Stanford University’s Hoover Institute, “a public policy think tank promoting the principles of individual, economic, and political freedom.”

Lomborg’s latest book is False Alarm: How Climate Change Panic Costs Us Trillions, Hurts the Poor, and Fails to Fix the Planet.

The Wall Street Journal is publishing commentaries from Lomborg leading up to and during the United Nation’s event where leaders from around the world, including President Joe Biden and 13 members of his cabinet, will call for making climate change the greatest threat facing humanity and the planet:

Looking at much of the media reporting ahead of this week’s climate conference in Glasgow, you’d think the world was subject to biblical plagues—blasted by fires, floods, hurricanes, drought and disease. But as Bjorn Lomborg has explained recently in these pages, while global warming does pose problems, it is hardly the unmitigated disaster often portrayed. At times, the solutions activists propose can be far worse than what they’re trying to prevent.

Lomborg argues that humanity has solved much more dangerous problems than climate change over the past century, and can continue to do so.

In other words, “the climate changes, but so can we.”

The Journal expanded on that theory:

For instance, raising the height of dikes would protect 99.99% of the people global warming threatens with floods as sea levels rise. Innovations like this don’t get rid of every risk that climate change poses, but the policies necessary to do that—if they’re possible to adopt at all—can make things worse.

The poor would suffer most from the effects of global warming—such as starvation, disease, heat death and flooding. But the regulations that climate activists advocate would hit them even harder, as Mr. Lomborg details. Take malnutrition deaths: Economic growth has lowered such deaths dramatically over the past 30 years and likely will continue to do so over the next 30. Climate change slightly slows that descent by shrinking crop yields, which even stringent climate regulations couldn’t prevent entirely. In the process these measures would slow growth, keeping as many as 80 million people in poverty in 2030 who otherwise wouldn’t be—causing even more malnutrition deaths.

This high cost to the world’s poor is a large part of why carbon emissions won’t be eliminated any time soon. The developing world wants access to consistent cheap energy, which means fossil fuels. Right now, the air pollution from the burning of renewable resources like wood, dung and cardboard kills 700,000 people in sub-Saharan Africa a year. And more than half a billion Africans lack access to electricity. To give a sense of how much electrifying Africa would increase emissions, each year California uses more electricity on its pools and hot tubs than the 44 million inhabitants of Uganda use for all purposes.

Take wildfires, for example, which have actually decreased, according to Lomborg’s commentary on the U.N. and other climate change activists who are fear-mongering about the threat from wildfires.

“Even a report from the World Wildlife Fund—chillingly subtitled ‘a crisis raging out of control?’ —concedes midway through that ‘the area of land burned globally has actually been steadily declining since it started to be recorded in 1900,” Lomborg wrote.

As this year’s United Nations climate report argued, fire weather—conditions conducive to wildfires—is going to become more common as temperatures continue to increase. But this doesn’t mean people will sit idly by and let it happen. When models factor in human adaptation, it turns out that these increases in fire damage disappear. An April study predicts that population growth and economic development will overwhelm the potential of global warming to encourage fires. Climate policies could achieve a greater reduction in burned land, but at the cost of many trillions of dollars.

While the share of the U.S. burned by wildfires has risen since the 1980s, influenced in part by climate change, that’s not the whole story. Fires in the U.S. today burn less than a fifth of the area that was scorched each year in the 1930s, and an expert panel found that the recent uptick is mostly the result of poor forest management.

It is true that more people will probably be threatened by fires in the future, but this is because part of the world’s growing population will settle where wildfires are more common. The number of homes in high-fire-risk zones in the Western U.S. has increased 13-fold over the past 80 years and is set to increase further by 2050. A 2016 Nature study concludes this is true globally. “Contrary to common perception,” the researchers write, “human exposure to wildfires increases in the future mainly owing to projected population growth in areas with frequent wildfires, rather than by a general increase in burned area.”

When addressing the challenges of uncontrollable climate changing it would be better to let people find solutions instead of global mandates that do more damage than good, he says.

“It would be better for everyone—in developed and developing nations—if the Glasgow conference doesn’t end with the adoption of radical climate regulations,” the Journal concluded.