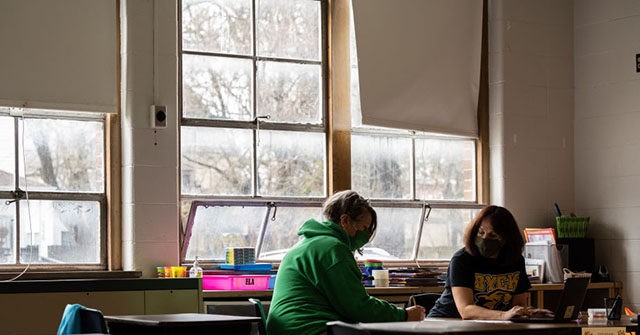 As public school cancellations abound across the nation, districts are citing “fatigue” and the need for teacher “mental health day[s]” as the cause for staffing shortages despite the fact that many teachers have been home for over a year due to the coronavirus, according to Fox News.

Colorado Education Association President Amy Baca-Oehler told USA Today that “there’s an overwhelming sense of exhaustion” amid some Denver-area schools returning to remote learning as a way to mitigate the effects of slim staffing. “The reality is that these districts just don’t feel they have any other options than canceling school for the day,” Baca-Oehler said.

But as Fox News reports, Pennsylvania, Michigan, Washington, and Maryland have also seen major issues with staffing, as, for example, 600 Seattle teachers requested the Friday after Veterans Day off. While the district blamed the request on “the fatigue that educators and students are experiencing, locally and nationwide, 11 weeks into the return to in-class learning,” a sentiment felt nationwide by parents is that teachers “care about themselves more than they care about the kids,” per one Pennsylvania parent.

As Breitbart News has extensively reported, many teachers’ unions are sporting lofty demands on districts and the federal government in order to buy teaching services back from pandemic norms.

Similarly, in August, American Federation of Teachers President Randi Weingarten argued that her influential organization “need[s] to be working with our employers, not opposing them, on vaccine mandates and all their vaccine policies” for teachers.

In Massachusetts, the Massachusetts Teachers’ Association in March attempted to delay returning to in-person learning unless Gov. Charlie Baker (R) would divert coronavirus vaccine doses away from standard vaccination sites so that teachers could receive the shots in their schools. At the time, Baker said, “I am not going to be in a position where I take vaccine away from people who are extremely vulnerable, have multiple medical conditions and are over the age of 65 to give it to a targeted population. … We’re just not going to play that game.”

As Fox News points out, vaccine mandates have also been a cause for concern for some teachers, prompting them to leave the profession altogether in order to avoid vaccine coercion.

The demands, however, do not stop at the coronavirus as teacher salary appears to be another potent driver behind shortages. Michigan state superintendent Dr. Michael Rice said, “We need to re-invest now. We need to rebuild the teacher profession,” according to Fox News, promoting a five-year plan of $300-500 million in recruiting and retaining teachers.

Indeed, according to Education Week, 15 percent of school district leaders across the country would regard staffing issues as “very severe,” while 25 percent would rate the shortages as “severe.” Further, only five percent of administrators claim they are not experiencing staffing issues. Forty-eight percent of respondents reported a struggle to find a sufficient number of full-time teachers.

Shortages are not just felt at the teacher level either, as Education Week also points out that “slightly more than three-quarters of respondents said they’re having trouble finding enough substitutes to cover teacher absences; 68 percent said bus drivers are hard to come by; and 55 percent said they’re struggling to fill open positions for paraprofessionals and instructional aides.”

Many are not optimistic about hiring prospects moving forward. The Montgomery County, Maryland, education association president, Jennifer Martin, said she is worried about “the potential for a great resignation” as her public school district is reportedly short 161 teachers and over 100 paraeducators, according to Fox News.

The Bureau of Labor Statistics reported 575,000 fewer state and local education employees, and 65,000 employees left the industry between September and October.