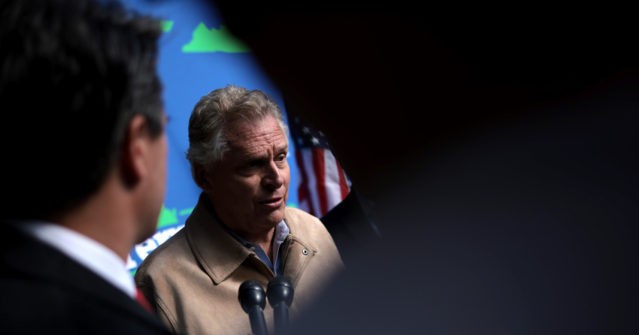 Virginia’s Democrat gubernatorial candidate Terry McAuliffe abruptly canceled his event in Virginia Beach the day before the election, sparking further speculation on the degree of behind the scenes panic within the McAuliffe campaign less than 24 hours before polls open.

McAuliffe, who spent the weekend campaigning in Northern Virginia, and his Republican challenger Glenn Youngkin, who has been surging in the polls in the race’s final stretch, had events scheduled in Virginia Beach on Monday. However, a spokesperson for McAuliffe said the Democrat’s Hampton Roads event has since been canceled.

While Youngkin will hold an event at Neptune’s Park, McAuliffe will be “campaigning today in a different portion of the state,” according to 13 News Now.

The last minute change comes as Youngkin surges in the polls in the final stretch of the race. Monday’s RealClearPolitics average of polls shows the Republican up by 1.7 points following the release of a series of polls showing Youngkin up over his challenger. Those polls include a Fox News poll showing Youngkin up by eight percent, as well as a Fox 5 DC/InsiderAdvantage poll and Trafalgar Group survey, both showing the Republican leading by two percentage points.

Youngkin spoke to Breitbart News Saturday on the eighth day of his ten day bus tour, describing the enthusiasm he has seen not only across the state, but the nation as well.

Education, Youngkin said, is one of the primary issues dominating the thoughts of Virginia voters, and parents across the country are begging them to “make a statement for us.”

“Terry McAuliffe says you don’t have a right. He wants government between parents and their children — politicians and bureaucrats dictating what our kids are doing,” he said, describing his Democrat challenger as the “Godfather of [the] modern day progressive Democratic Party” and predicting a win on Tuesday.

“Virginians are absolutely rejecting this partisan, divisive politics that’s been the trademark of Terry McAuliffe’s 43 year political career. … He’s seeing it crash down on him because Virginians are rejecting it,” Youngkin said, emphasizing that Tuesday’s governor’s race
is not just for Virginia.”

“It is for America, and Virginians get to make a statement about what our future can look like,” he said.