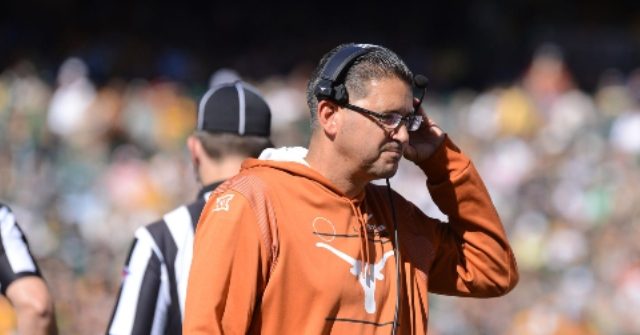 An assistant football coach for the Texas Longhorns and his stripper ex-girlfriend is being sued by the parents of a child who was bitten by the stripper’s pet monkey at a neighborhood haunted house display.

Austin resident Danielle Thomas, a former stripper who performed under the name “Pole Assassin,” and Longhorns asst. coach Jeff Banks have been named in a lawsuit filed by Amy and Casey Clinkenbeard. They claim that Thomas invited their son to a backyard Halloween display to see her monkey named Gia.

The lawsuit claims that Thomas told children that the monkey was trained to give people high fives. But when the Clinkenbeard’s son tried the trick, the monkey bit him; instead, the New York Post reported.

“Instead of giving a high five, Danielle Thomas’ monkey aggressively bit down on [the boy] C.C.’s hand and refused to let go,” the family’s filing reads. “C.C. was forced to manually pry the monkey’s jaw open. There was so much blood that C.C. was unable to see the full extent of the injury.”

The boy and his friend quickly went to the nearby home of a man they knew was a doctor, and he cleaned and dressed the bite wound.

The parents also say in their lawsuit that when they spoke to Thomas about the incident, she seemed more worried about her monkey than about the couple’s son. “Instead of showing any semblance of care for an injured child, Danielle Thomas was instead worried about the risk of her monkey being taken away,” the lawsuit alleges, USA Today added.

The suit further claims that Thomas steadfastly refused to supply the family with the monkey’s vaccination records, so the boy had to undergo painful rabies shots as a preventative. The Clinkenbeard’s are asking for medical cost compensation and punitive damages for “significant harassment and embarrassment” from the incident.

Thomas has claimed that she never invited the kids to see the monkey and even said she was unaware that the boy went into the backyard. However, she also denied knowing about the bite until later. “Neither did I know anything about a bite! Until a doctor of the neighborhood told me,” she wrote.

The lawsuit also alleges that Thomas convinced a friend to go on a radio talk show and make misleading statements about the monkey biting incident throwing the whole affair into the public eye and embarrassing the family.

While coach Banks is named in the lawsuit, it is not known whether or not he was around the home during the incident.